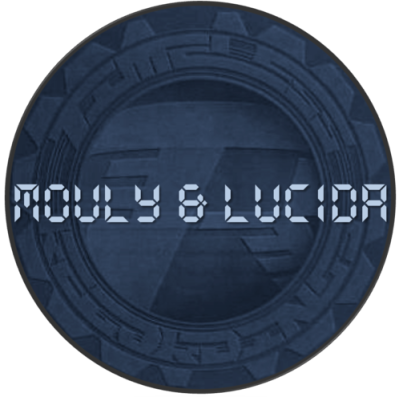 The eighth installment of the “Whatever happened to …?” series is dedicated to one of the most exciting, though short-lived, mid-nineties drum and bass outfits Mouly & Lucida. Both hailing from the town of Abingdon, Oxfordshire, UK, the duo emerged in 1995, championing the quality over quantity ethos, creating serious waves in the drum and bass landscape of the time.

Alex Moul (Mouly) and Graham Fisken (Lucida) already knew each other from around town and various free parties Alex used to dj at, but it was not until 1994 that they properly started to chat about making music together, while Alex was working at “Massive Records” in Oxford. Graham owned a little bedroom studio and had already a release under his belt on the seminal breakbeat/hardcore Production House imprint (Lucida – The Project b/w Tunnel Vision, PNT061, 1994). A casual meeting at the record store and a discussion over that very record would initiate a friendship and a great collaboration between them.

With minimum equipment (an Akai MPC60 and an SY85 keyboard, later upgraded with the addition of a 12-channel mixing desk and an FX unit) at their disposal at first, the duo got involved into production, with Lucida taking care of the editing duties.

“Alex would come round 2 or 3 times a week for a whole evening each time, then I would often stay up half the night with headphones on finely chopping up beats on the MPC and trying out little effects…”

After a couple of efforts, presented first to the Oxford-based Legend Records’ management crew (Q Project & Spinback of Total Science and DJ Gwange), their first output was eventually released to public acclaim in 1995 on Legend Records’ subsidiary Code-001. The interest grew rapidly and they were readily signed by Timeless Recordings. Timeless Recordings has been a label set up by Graham Mew (aka The Invisible Man) that played a pivotal role to the progression and evolution of the new drum and bass sound. On top of doing production and engineering work for other artists, Graham Mew was running and promoting Timeless Recordings almost single-handedly; that is writing his own music, sorting out DATs for djs to play, running around London for distribution, as well as taking care of all business matters pertaining to running a label. As a result, Mew in late 1994, decided to take a well-deserved break from the scene and passed control of the label over to friend Jeremy Winters (aka Brillo), who was aided by the well-established local dj and artist Dj Lee.

Between 1995 and 1996 Mouly & Lucida released a string of three immaculate productions on Timeless and one remix on Renegade, before their last joint-output saw the light of day. With exemplary synths use, creating breath-talking atmospheres and sonar soundscapes, dexterous programming and exquisite manipulation of vocal samples, all of their productions have been in high demand, getting support from many major djs of the circuit, including the likes of Fabio, LTJ Bukem, Kemistry & Storm, Total Science and Dj Lee.

Their tracks Inertia and The Abyss have featured in the paradigm-shifting compilations Legally Stoned – A New High In Drum & Bass Volume 1 and Promised Land Vol 2 (compiled and mixed by Fabio with Cleveland Watkiss on mic duties), both released by Higher Limits; a label with main aim to provide the general public with compilations of the upmost quality.

Mouly had also been a resident dj at the “Zodiac” in Oxford, eventually earning a prestigious guest slot at the famous “Speed” club nights in London.

Two obscure tracks entitled Stalker and Mercury respectively, which unfortunately never made it past the dubplate stage, have been their last work, before the duo parted their musical ways. Mercury eventually featured some years later in a rare compilation available exclusively in Japan.

Life circumstances such as Alex’s relocation to the United States made it impossible for the duo to carry on, so the Mouly & Lucida cycle reached a natural conclusion ca 1997. After a short hiatus, Mouly resurfaced with two solo outputs, which were released in 2002 and 2003 respectively. 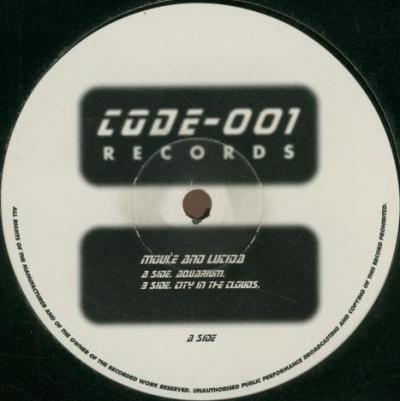 Aquarium / City In The Clouds

The first Mouly & Lucida output saw the light of day in 1995. Aquarium b/w City In the Clouds, LEG014 was released on the Legend Records’ sub-label Code-001 (under a Legend catalogue number). Aquarium is a laid-back tune, with warm, funky synth stabs, reminiscent of Doc Scott’s Far Away. On the flipside however, City In The Clouds is a different affair and the highlight of the release. Opening with beautiful chords, the main vocal theme is introduced; a sampled dialogue between Luke Skywalker and Yoda from the movie “Star Wars: Episode V – The Empire Strikes Back”: “I saw a city in the clouds … It is the future you see …” – followed by a cataclysm of amen breaks. 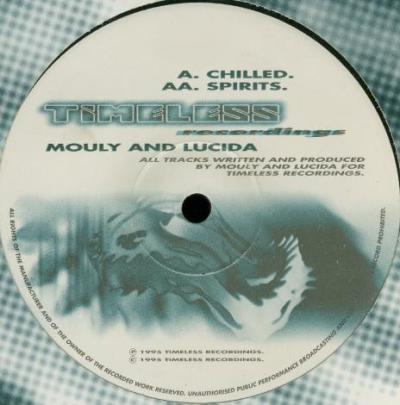 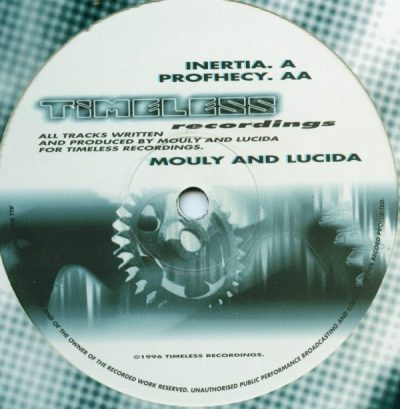 Their second production on Timeless and undisputedly their best has been the pivotal, genre-defining Inertia b/w Prophecy, DJ017, 1996 (misprinted as Profhecy on the record info side). Inertia is one of the label’s highlights; excellent chord progression, captivating female vocals (part of it used also by Essence of Aura for Soul Temptation) and a glorious breakdown. The mesmerizing “You said I’m not the one” lyric sampled from Mary J Blige’s Real Love always triggers a wide spectrum of emotions. Prophecy is by no means inferior; nine minutes of roaring flutes and keys over a cascade of snares and hi-hats. 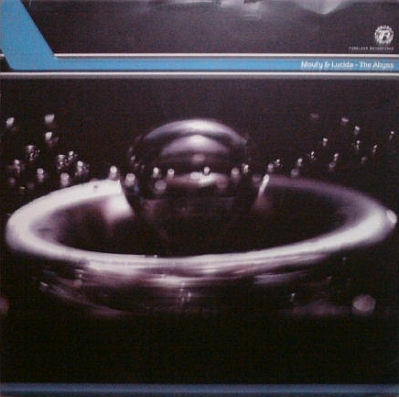 The last part of the trilogy has been The Abyss b/w MJ12, DJ020, 1996. The Abyss is a trademark atmospheric masterpiece. MJ12 marks the first time, since City In The Clouds, that Mouly & Lucida made use of their reconstruction of the famous “Winston Brothers’ break” sample, which they have deliberately tried to avoid on their previous works;  a track with darker, haunting melodies, over an assault of amen breaks and bongo percussions. 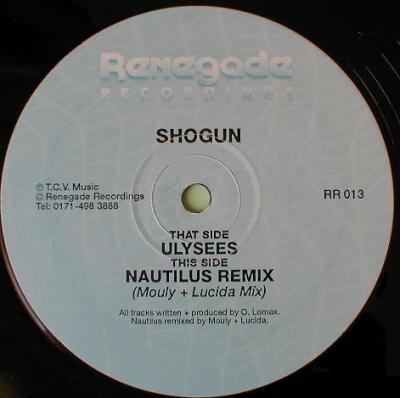 In 1996, Mouly & Lucida were offered the opportunity to engage into remixing duties. Their impeccable interpretation of the classic Nautilus (original by Shogun) was well received as equivalent to the original; released on Renegade Recordings as the flipside to the beautiful Ulysees (Shogun – Ulysees b/w Nautilus (Mouly & Lucida remix), RR013, 1996). 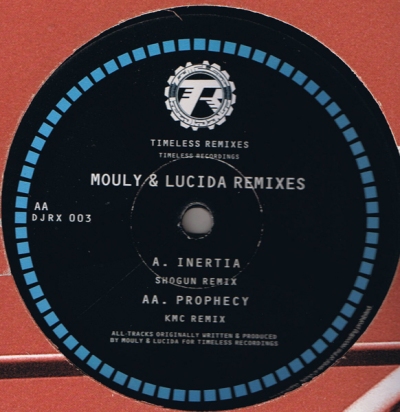 Shogun (alias of Oliver Lomax, a prolific artist with releases on Renegade and R&S, who would be later widely known as Artemis recording and engineering for Good Looking Records) would soon return the favour remixing Inertia. KMC, the artistic supervisor of Temple Music, a record-store owner in Scotland and fellow-artist of the Timeless stable, who would later record for Partisan and several sub-labels of the GLR collective, has also provided a standout remix of Prophecy (Mouly & Lucida – Inertia (Shogun remix) b/w Prophecy (KMC remix), Timeless, DJX003, 1997).

Epilogue and fast forward to the present

In an era when drum and bass was well shifting away from its jungle roots, Mouly & Lucida offerings have been representative of the genre’s ambient-jazz-influenced new trajectory. Despite the limited number of their outputs, all Mouly & Lucida releases are quintessential for every listener and collector, marking indelibly the drum and bass landscape of drum and bass’ golden era, shortly before the emergence of techstep and the wave of noir that swept the scene in the second half of the 90s.

Alex Moul, a high-profile, veteran skateboarder, has relocated to the United States, where he’s still exercising his expertise, representing the “Santa Cruz” brand. Under his recording alias Mouly, he made a short discography re-appearance in the drum and bass proceedings, after a visit back to his homeland, with two recordings; the first for Sapphire (Mouly – Electric Snakes b/w We Will Control, SAPPHIRE001, 2002) and the latter for Renegade Recordings (Mouly – Fall Into You b/w Hangin’ Out The Back, RR44, 2003). Sapphire Records has been a one-off label funded and supported by Basement Records, as a platform for Mouly to release his own material. The other two tracks of the original DAT tape were signed to Renegade.

He is still working on various projects, making music and djing in Los Angeles and San Diego collaborating with a crew called “Adrenalin”, who organize and promote club nights.

Graham Fisken has not released anything solo since Mouly & Lucida, but he does still make tunes for his own enjoyment.  He has been also one of the resident djs in “Raoul’s” bar, Oxford for about 7 years (until about 2008), playing funk, soul, jazz, hip-hop and occasionally a little drum and bass. He’s currently working on some stuff now (not necessarily drum & bass), which might end up going public, so watch this space…  A few experimental tracks that he has done already are available on his Soundcloud page.

Aside from the electronic stuff, he also plays drums and has been in a few different [amateur] bands over the last 15 years.  Most recently, he’s drumming for a band called “The Same”, playing cover versions of 60’s garage rock like “The Kinks” and “Jefferson Airplane”; separate to all that, his day job is as a product manager for an electronic toy company.

Excerpts of Alex’s and Graham’s comments on how they had envisaged their musical career and a brief account of their achievements:

“ … Our standard routine after finishing a tune, which would take us on average 8 mid-week sessions, was to record it on tape and drive around playing it on the car stereo in order to hear how it would sound like …”

“… I was sitting with my girlfriend on a Wednesday night with a bag of fish and chips, listening to Fabio playing on Radio 1, when “Spirits” kicked in. …Hang on, I recognize this tune and I remember calling up Graham… “

“ … To have people interested in some little tunes we hacked out of my old bedroom is pretty amazing.  I certainly hadn’t imagined that our influence was so far-reaching.  I suppose we probably expected to become rich and famous, because we were young and naïve, but it obviously didn’t happen.  The biggest thing Alex and I probably got out of it was the buzz of hearing our tunes played out to an audience and watching people freak out to them, or hearing them played on the radio.  At times, it really did feel like we were superstars in our own little way, when we got to rub shoulders with the likes of Goldie, Bjork, Tricky and Lady Miss Kier of Deee-Lite in the “Speed” night at the “Mars” Bar.

“… That was the vibe for us; we were just kids looking to make something and the fact that top djs were starting to play our stuff was the biggest thing about it …”

If you have ever wondered whatever happened also to Hidden Agenda, Creative Wax, Partisan Recordings, Endemic Void, Voyager, Essence Of Aura and Foul Play, visit the blog’s archive following the link below:

14 thoughts on “Whatever happened to … Mouly & Lucida?”